September 27, 2010
So I was lucky enough to get a chance to ask Frankie Hill a while ago about his epic ender (maybe the first in a skate video?) in "Ban This" back in '88 and this is what he had to say about how it went down;

ODG:
You've probably been asked this a million times but what happened with the rail at the end of Ban This? How many times did you try it? Ever make it?

Frankie Hill
I slid off the end on my best attempt.Ii tried it probably 15 times 35 stairs with rails got going pretty fast , should of tried the thirty on the other side , I was a little greedy lol


ODG:
Damn...that's rad. I grew up in SB so I remember when Ban This came out I was floored. Knew half the spots. Made such a huge impact on me and probably one of the things that made keep skating.

Thanks,  I remember the first time I went to that rail it was the trade show. I wanted to tape it and Powell said no they wanted to film the trade show so the team manager went with me to watch me boneless to it, the 30, and for some reason the slide went perfect so perfect that I was able to look over at him and say "wheres the camera?". I had a sprained ankle at the time so I jumped off at the end but just walked out of it . That's why we went back it goes to show you cant let those opportunities escape ,thanks again for the cool comments sb for life,

ODG:
I think what blows people away about your skating is the thought process behind it. No one was doing rails that big back then. People couldn't grasp it. I'm super stoked on Diabolical too. Glad to see a good company come out of SB.

For current stuff head over to www.diabolicalskateboards.com 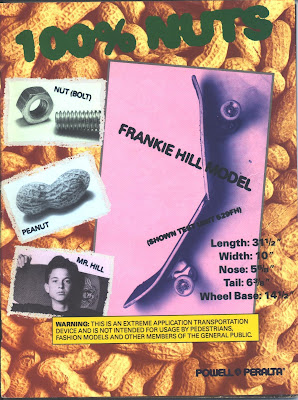