Showing posts from 2011
Show all

Just one more before the holidays... 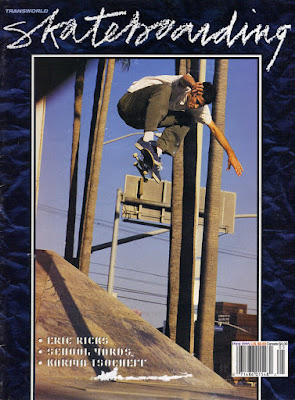 Wanted to tie this in to the Grinch graphic, which has to be one of the best board graphics of all time, but couldn't find the board in any mags I have... ..anyways, without any further ado here's Mr. Jason Lee. I'm not really big into themes anyway.. Happy Holidays..ODG
Post a Comment
Read more 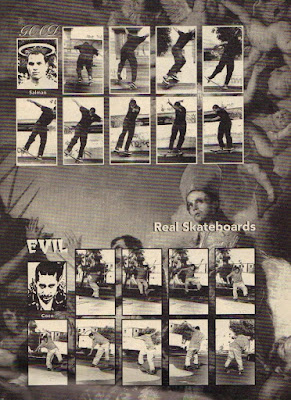 Just a sequence of a long-forgotten Real Ad with Salman Agah and Coco Santiago.. figured with the upcoming holiday it was appropriate with the good/evil angle.   Got a bunch of stuff on the horizon, trying to switch it up with the old and new stuff so keep checking back.. I fucking love skateboarding..
Post a Comment
Read more 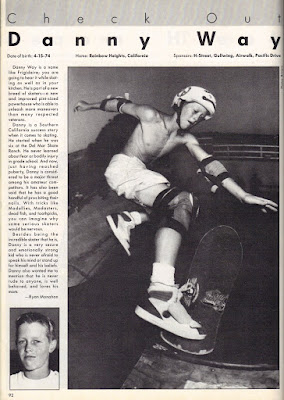 Couple things. First, changed back to the old format because the new "dynamic" format was kind of irritating, sorry if you liked it. Second...I got nothing. Super stoked to be skating again. Also psyched on all these Danny Way flicks I came across. One foot McTwists? Who does that?? Oh yeah, he does.. Just threw in this Christian Hosoi photo because it's bad ass.. I would love to be able to blast on a ramp like that.. "
Post a Comment
Read more 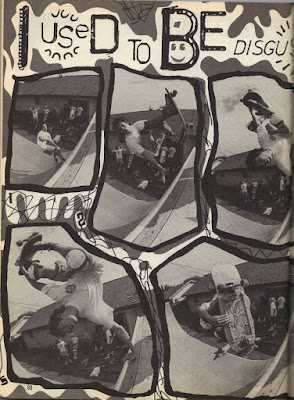 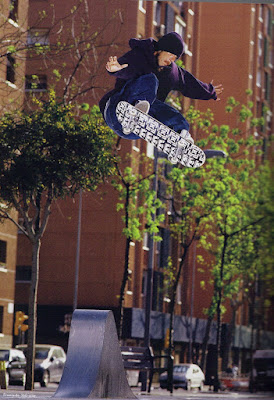 I've been injured for about two weeks now after getting over a bad cold so thinking about skating has not been fun lately. However, just wanted to post up some stuff of Tom Penny. I just find it amazing that after all these years of being somewhat elusive, we're getting an abundance of good stuff. Psyched on this Skate Sauce vid too;
Read more

Small oversight...left out Torey Pudwill's ender from the "Big Bang".. I don't understand what's going on with that creepy dude at the beginning. Is he cleaning Torey's board or talking shit or what??
Read more

Been siting on this one for a while. Keep in mind this is subjective but the ones that had the most impact on me are as follows; 1. Daewon. Love Child. Around 3:30 The granddaddy of them all. Slow-mo over a small gap but still, it was difficult to conceptualize what was going on when this first came out. 2. Rick Howard, Goldfish. around :40 First time I'd ever seen it done over anything. Kind of a shocker. 3. Stevie Williams, Tantrum video. About one minute in. Can't remember when I saw it but was just blown away at how effortlessly it was done, while in a line. 4. Richard Mulder, the Chocolate Tour Another one done over something. Super clean style. I kinda' forgot how good this guy was.. 5. Bryan Herman, Stay Gold. Take your pick. Dude has this trick down to a science. Personally I vote for the one over the handrail at about 4:09 6. Sean Malto, And Now.. ..towards the end, down a massive stack. 7. Kris Markovich. Element. Thir
Read more 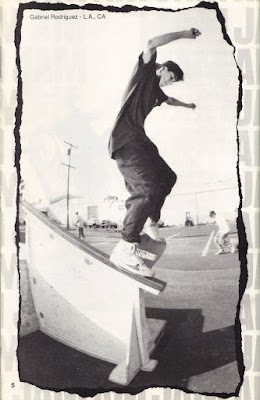 What's good people? Just a few oldies. Thought I would switch it up as I have been mostly just putting videos from youtube up on here lately. This is from a Powell-Peralta ad (before they became just Powell), from December 1989. What was crazy about these dudes is just how advanced they were. But they got the credit they deserved on Powell. They didn't even spell Paulo's name right!
Read more

Just want to be clear...Mike Carroll is probably the best street skater of all time. Oh no? Don't believe me? Disagree? That's fine. Here is some supporting evidence.. @3:22 By the way, these youtube ads are freakin' annoying..
Read more

Had an idea for a post that I will still probably do in the near future but while trolling Youtube for videos I came across these 2 gems; As always, I'm blown away by Mike Carroll's cleanness, and I've never seen this Keenan footage before. Also thought Rick Howard killed it at those demos. In the second clip was just a good refresher at how good Rick McCrank is. That's it for now..
Post a Comment
Read more

Just came across this Jesse Silvey part from the "Boulevard" video circa 2005. Also a brief appearance from OG Santa Barbara legend Dylan Gardner. Pretty damn sick.. he's been killin it forever. I remember seeing him at the Powell Skate Zone back in the day. Annoying ass little kid...that could skate better than 2/3 of everyone else. Not sure what he's up to now.
Post a Comment
Read more
September 10, 2011 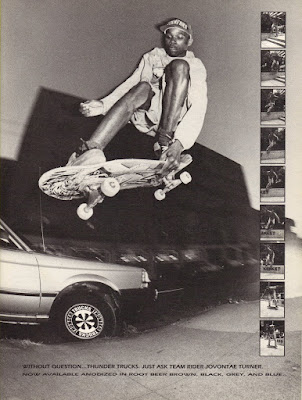 I realized that I had a couple of things scanned that I had not put up yet so here you go. Just an old Jovontae Turner Thunder ad I came across. I had an idea to do a whole post on Daniel Harold Sturt which is why I've had so many black and white photos on here but couldn't find any photos that I felt did him justice. There's got to be a website out there or a book on this guy. If not, there should be. I also liked this ad for the Carroll photo in the bottom right. And before I forget, just watched this Supra tour video and was so stoked on all the legends in there. Penny, Muska, Stevie, Boulala (although I'm not sure what tricks he does). Super inspiring. SUPRA 2011 EUROPEAN TOUR VIDEO from SUPRA Footwear on Vimeo .
Post a Comment
Read more 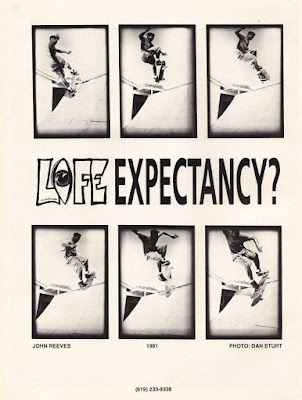 Haven't had access to my scanner for a bit and to be honest this thing takes more effort and discipline than I really have. However, here are a couple good ones I came across. I always admired Sal's skating, he went fast and had some pop which was not too common back in the early 90's. The Life ad with John "The Man" Reeves just caught my eye because of the sick photography.. ...loved that Sturt look. Got some more stuff in mind, I'll have to see how they pan out in a bit...
Post a Comment
Read more

Wow. Bad timing on that last post; http://chromeballincident.blogspot.com/search/label/tony%20hawk I know how skaters are finnicky about details so for the record I had my post up first. Although in hindsight it does appear that I was mimicking the style, which was unintentional. My bad. By the way, this might be the best thing I've ever seen on the Berrics: Can't think of anything else to put in and we've had a nice reprieve from the triple digit weather in Sac so...I'm out! Going skating..
Post a Comment
Read more 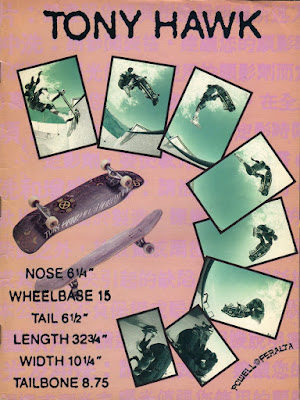 The man personally responsible for making it acceptable to be rich and famous in the non-skateboarding world...in addition to popularizing the 80's flop-over haircut, Tony Hawk. ...dude can just live off of doing handplants for the rest of his life and be legit.
Post a Comment
Read more

I was going to do a list of the top ten "Sal flips"; however when I started to put the list together I got to this part and just had to stop and watch it the whole way through. I think Adam McNatt is one of the most underrated pro's ever, and this part is just so ahead of it's time. What he does at 38 seconds in blows my mind every time I see it. People made a big fuss about Gino's 360 manual down the Roslyn banks,(which don't get me wrong, is amazing), but his old team mate does what I think is the first one ever at 1:20. Oh yeah, by the way, the "Sal Flip" is at 1:57.
Post a Comment
Read more

April 24, 2011
Came across this on the Almost website; To this day I still don't know why Deca went under. So many good skaters,a decent company name (as opposed to almost, which doesn't really roll off the tongue), and an amazing video, then kaput. Oh well, just glad to see anything from Daewon. Such an incredibly gifted skater.. oh man, I put this in here then turned up the volume. This song is horrible! Sorry!..
Post a Comment
Read more

April 11, 2011
Just saw this flick and want to tell you, whatever you expect, it's better. Such a good video. Not over-produced. No lifestyle shots. Just good skating. The music was all around bangin', with a couple iffy slower ones thrown in. Don't want to hype it up more than it already is, but check it out. You will not be disappointed... By the way I realize I've been slacking on posting stuff so will be adding some more content soon.
Post a Comment
Read more 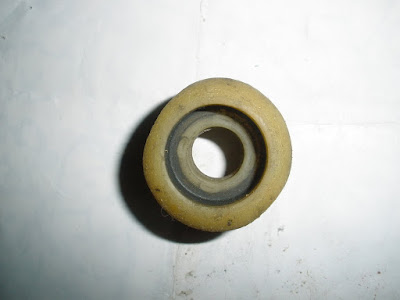 Just want to give a quick shout out to anyone that skated during the 90's and lived through the small wheel phase. These are 38 Specials that I went through in a week. Please skateboarding, let's not go there again..
Post a Comment
Read more
March 14, 2011 Figured it was about time to put some Natas on here.. and seeing as you can't really mention one without the other....
Post a Comment
Read more 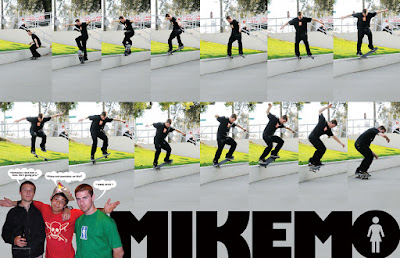 So.. I guess the Battle at the Berrics is back. Sort of excited about it, but at same time it's like eh (shoulder shrug). I watched the Shane O'Neil vs. Ishod Wair one. Have to say that Ishod might be slightly better than I had thought he was. But seriously..why the f does Berra always have to read the rules? If you've watched I, II, and III you can probably recite them by heart. In other news... loving these mini dv clips. and on a side note. Found this place.. whoo-wee!!
Post a Comment
Read more 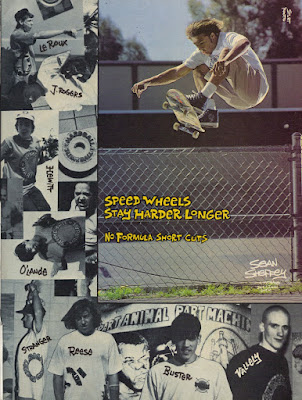 Just a couple old ads that I came across recently. This is a pre-Venture Caroll and a beastly Sheffey ollie. That Vallely photo in the bottom right creeps me out...
Post a Comment
Read more 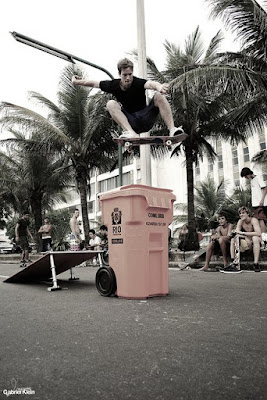 This is a picture of my buddy Dan who lives in Brazil. He is hands-down the best skater I've ever seen in person and I've seen a lot. We were going to try filming before he went down there permanently but it didn't work out. You'll just have to take my word for it that this guy murders it on a skateboard. Hopefully I'll make it down there sometime..
Post a Comment
Read more 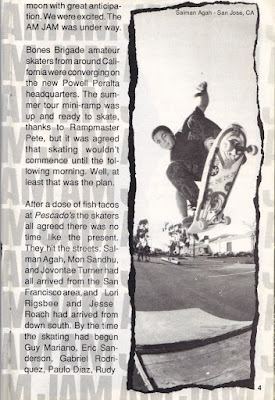 Just remembered that I had a pamphlet of stuff from the early 90's that was mentioned in Salman Agah's interview at The Chrome Ball Incident . I gotta' give credit where it's due. These interviews are f'n amazing..
Post a Comment
Read more 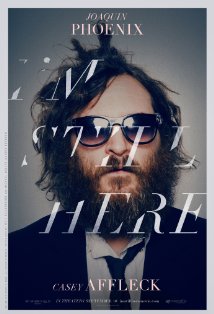 What's up, I just realized I haven't done anything on here for a while.. I've just been super lazy lately with the holidays and then...yeah. No excuses really. I've been skating and checking out a lot of stuff online. Hate to say it but the only things I've really been excited about skateboarding-wise are Paul Machnau's part for Red Star (?) skateboards and Ronnie Creager's Sunday Funday. Have to say that I was a little bummed out that The Berrics hyped up their Dae Won part only to charge for it..
Post a Comment
Read more
More posts