Showing posts from April, 2012
Show all

I was fortunate enough to catch Jesse as he was about to embark on a trip to Barcelona. He graciously took some time out to answer a few questions about the Shorty's days and what he's been up to lately. Enjoy. How did you get into skating? My Dad had a skate when I was very young, it was just around the house. I lived in Colorado in the mountains and there wasn't shit for streets there. So my dad would lay plywood in the driveway and I would tinker around. That was my first encounter with a skateboard. Who were some of your early skateboarding influences? Well, I was very influenced by early 90's skaters. I would say that I went from Frankie Hill to the mini Bones Brigade, and as time went along it was gold fish and Trilogy and the Menace teams. What other kinds of things are you into besides skating? Well, my latest pastime has been surfing. I've been going on little surf adventures to Hawaii and Mexico the last two years. besides that I love to pla
Post a Comment
Read more
April 23, 2012 Pretty cool to watch this guy progress throughout the years. From Powell Days to the contest scene to Element, Bucky's always added something to the equation.. His first board graphic was done by Sean Cliver if I'm not mistaken...(image borrowed from www.vaskateboards.com) Old 411 stuff.. Backyard bowl.. Have a good week, trying not to melt here in Sac. 90 degrees and Summer hasn't even hit yet...
Post a Comment
Read more
April 16, 2012

Trying not to jump on the Think bandwagon too hard, but I did catch this video on Eric Ricks' YouTube channel the other day. Lots of heavies in here but Drehobl's frontside 360 attempt over the Gonz is mind-blowing.. Also got some E. Ricks stuff I've been wanting to post and now seems to be the right time. Classic noseblunt on the San Marcos rail..
Post a Comment
Read more

You need to watch this.. 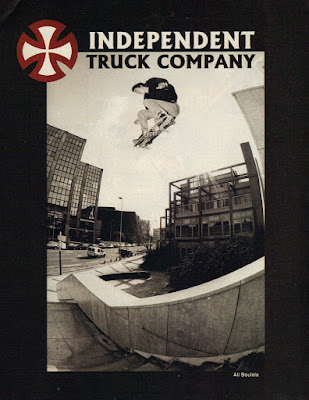 Say what you want, but I always thought Ali was/is the shit...even when I crashed into him at a skatepark in Ventura and thought it was Elissa Steamer.. In other Flip stuff..good to see these two skating together again
Post a Comment
Read more 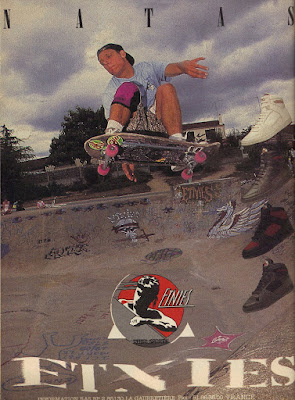 If you have some time to kill or are just a major procrastinator like me, this guy is always great to catch up on.. Have to say that I never realized how much raw talent this guy possessed until watching these... lots of never been dones. More older stuff here Oh yeah, and happy birthday to Guy Mariano. 36, wow.
2 comments
Read more
More posts