April 24, 2012
I was fortunate enough to catch Jesse as he was about to embark on a trip to Barcelona. He graciously took some time out to answer a few questions about the Shorty's days and what he's been up to lately.

How did you get into skating?

My Dad had a skate when I was very young, it was just around the house. I lived in Colorado in the mountains and there wasn't shit for streets there. So my dad would lay plywood in the driveway and I would tinker around. That was my first encounter with a skateboard.

Who were some of your early skateboarding influences?

Well, I was very influenced by early 90's skaters. I would say that I went from Frankie Hill to the mini Bones Brigade, and as time went along it was gold fish and Trilogy and the Menace teams.

What other kinds of things are you into besides skating?

Well, my latest pastime has been surfing. I've been going on little surf adventures to Hawaii and Mexico the last two years. besides that I love to play tennis and when I can rally up enough people playing b ball.

How did you get hooked up with Skate Sauce?

It's my buddy Amrit. We had been friends before the company so naturally I was involved when it came about.

Was it intimidating filming a part for the Hard Times But Good Times video?

No, I don't get out and skate that much so when i go on skate trips i have to get acclimated to my board again. I don't really give a shit if it's cutting edge skateboarding. I just skate and film and it is what it is.

Craziest story from the Shorty’s days?

There are soo many great time during that period. Going on tour, Japan was nuts. I felt like a member of a boy band or something. We had groupies, people waiting at are hotel overnight just to catch a glimpse. Ha ha silly shit...

Are you still in touch with anyone from back then?
Yea I hung with Peter and Brandon last year in Spain, we keep in touch...everyone else I don't know? Oh yeah i see Aaron Snyder whenever I go to Stoner Plaza in LA.

You always seemed to bring something unique to skating in terms of tricks. The nollie tre flip in the Guilty Video for instance. Where did you get the inspiration for something like that?

The nollie tre wasn't a common trick back then and can remember my friend Carl Nunes was doing them on flat in front of the skate shop and I bit it from him. I knew once I got the hang of them I was gonna put one in my part. That same day I did the switch big flip over at 3rd and army. Definitely one of the best days skating in my life.

I know you travel a lot, where's the best place you've been to?

Well I'm here in Barcelona at the moment, I love this city. It's my home away from home.

Skateboarding has changed so much from being raw street sp parks all over the place and full parts showing up on the internet, major corporate sponsorship and all, what's your take on the current state of skating?

Well one side of the coin is...little Johnny is practicing his kick flips in the garage at all hours of the night while you're sleeping. He will one day have a pro model energy drink, hottest internet part, wife, two kids and live happily ever after. I cant hate on that.

I gotta ask..what happened with Shorty’s? Seemed like you were destined to go pro for them and then….?

I get that question a lot and can't for sure say. But to me it seemed they tried to fix what was already working. I had pictures in the mag the same month they kicked me off so it wasn't like I was not doing my job.

I think people are just curious because you were killing it at the time.. seems like a bad decision on their part.

I think if they didn't fuck around they could still have been a relevant brand today. The owner straight up got greedy man I think the company was starting to level off and he started to panic and tried to revamp the team and kick the homies off.

Who are riding for now?

All my friends Skate All Cities, Skate Sauce, the homies out here, Desert Crew. 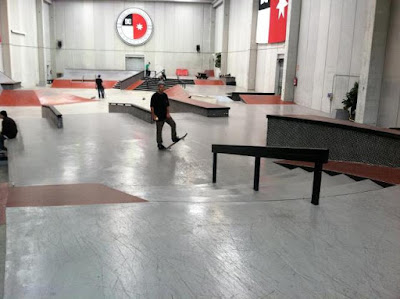