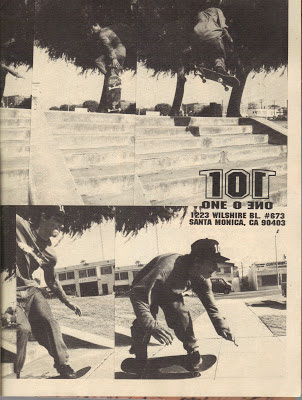 This post started off with an idea to put up the 101 ad with Gabriel...then realized that it's hard to mention him without also mentioning Guy, Rudy, and Paulo. Love these videos by Jacob43, aka Jake Rosenberg. Especially considering that they were filmed in my old stomping grounds in Santa Barbara. Frankie Hill cameo.. This one's a little old but nevertheless an amazing display of raw talent by Rudy Johnson.. ..more Wrench Pilot 'toons coming next. Promise!
Post a Comment
Read more

October 17, 2012
1. no comply (43) ..Kalis' call to put it to rest partway through a line is a solid indicator of how commonplace it is nowadays. Gotta love the no comply/tailslide to switch crooks combo. Never did get why it was also known as a 43 though.. 2. boneless ..They were big in the 80's then died out with the street explosion, and now that it's ok to skate tranny again they're everywhere. Some people never stopped doing them. Shout out to Peter Hewitt.. and Brian Anderson for the handrail innovation. 3. five o to fakie ..this one's older than dirt. Why it suddenly made a reappearance is anyone's guess. Stalled out or with a long grind, always looks good.. 4. late shove it.  Ronnie's 360 late shove it over the trashcan in his Berrics' Battle Commander part is mind blowing, and Pfanner (again popping up on here) has a mean backside one.. and with that hair I sometimes think I'm having a Sheffey flashback. 5. impossible. Hard to explain how huge th
Post a Comment
Read more
More posts