10 tricks I would steal from pros (if I could)

July 25, 2016
Note: Scanner took a dump so I couldn't get all the images I wanted on here. I'll be back with some more new/old stuff soon..

In no particular order...

1. Andrew Reynolds' frontside flip. Alright, let's get the obvious out of the way. Dude owns this trick and can do it down, up, over anything. Almost looks too easy for him. Close runner up would be Mike Carroll and of course Tom Penny, both legends who have shown total mastery of the trick for years with unique style and minimal effort.

2. Dylan Rieder's impossible. I couldn't think of a better description for Dylan's use of the trick than the name itself. Going over the barrier at Street League then that bench in NYC was already a mind-fuck. Than dude takes it over the chain link fence to massive drop with a tail grab to boot and it's a done deal. It would be a sin if I didn't mention Ed Templeton as well.  My historical facts are murky but he was clearly one of the pioneers of bringing the trick to street from freestyle with an early appearance in H Street's Hocus Pocus.

3. Jeremy Wray's Frontside 360 Ollie. Santa Monica Triple set, Carlsbad gap....he took it to a whole other level very early on. In a nod to the Blockhead 30 year anniversary, here's one down the Encinitas double set. 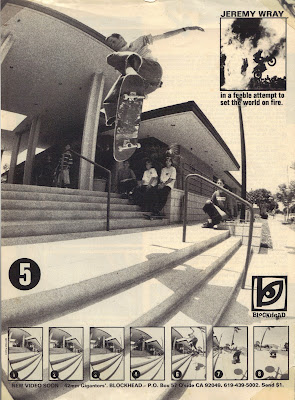 4. Josh Kalis' 360 flip. This trick is so standard these days that it's rare to see one stand out. But Josh Kalis' really is a thing of beauty. Off the bump, over the trash can at Love Park (RIP), showed total mastery. His is the standard all should aspire to.

5. Anthony Van Engelen's switch 360 flip. A personal favorite trick of mine, having learned them switch before regular, I am envious of the degree to which AVE can hammer them out...at speed....and with style. I like that he doesn't necessarily land them "bolts", but stomps them nonetheless.

6. Wieger Van Wangeingen's inward varial heelflip. It's always great when you see the different variations that someone can come up with when they just have a trick so dialed in.Wieger's taken it to and out of ledge tricks, gaps, stairs, you name it. Such an awkward trick, but Wieger makes it look good. A good runner up would be Daniel Castillo, who's had them down forever.

7. Daewon Song's Switch Nose Wheelie balance.. very difficult to boil Daewon's technical mastery down to a single trick. But, for the sake of argument, Daewon has done so many switch nose wheelie variations in to and out of that it boggles the mind. His switch 360 flip fakie nose manual to fakie tre out ender for Almost's Round 3 instantly comes to mind..

8. Bryan Herman's hardflip. I know I've mentioned it before on here, but I would die a happy man if I could hardflip even a tenth as good as Herman. I would almost put it on the equivalent level of Reynolds' frontside flip. A trick that seems so standard these days that was difficult to even comprehend years ago. First one I saw was a grainy video-grab sequence of Alf (Alphonzo Rawls) over a small gap hole in the ground...

9. Chico Brenes' Nollie Heelflip. Chico's been doing them for more than 20 years and his nollie heels seem as fresh now as they did over the hip in his line for the Mouse video. His First Try Friday at the Berrics a few years ago showed that it doesn't matter what the obstacle is, Chico will nail it.

10. Aaron Homoki aka "Jaws" drop capabilities..There's something just supernatural about how he can absorb the gnarliest impacts and walk away (seemingly) unscathed. But he is taking skateboarding to it's extreme limits and for that I applaud him. When looking back at Ali Boulala's attempts at the Lyon 25 set,  the amount of tries that Jaws went for it vs. Ali's 2 attempts (I mean no disrespect, Ali is one of my favorites), shows how much abuse his body can withstand. And the dude's always smiling!!  I hate to think about how much this guy's knees are going to be hurting when he's older.